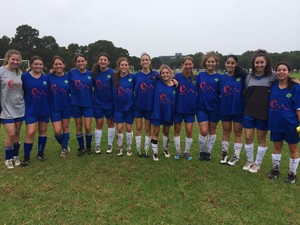 Our Maccabi Hakoah team have won through to the grand final to be held next Sunday 19th Oct.

The girls won convincingly today against an undefeated Bonnet Bay from the South Sydney Football Association. Final score was 4 – 2.

Maccabi started well scoring the first goal soon after the start of the game. The girls turned defence into attack with Jodie Rosenberg passing the ball to Sammi Levene who carried it downfield before making a superb pass to Nicky Zwahlen who shot across the goal into the net off the post.

Play was quite even for a while but the girls got lucky towards the end of the first half and scored a nice goal by Sammi Levene who cleverly deflected the ball off an opposing player into the net.

Defence continued to be strong with Sammi Diamond, Lauren Klimt, Kate Woods and Sammi Bowen keeping things in check while Tamara Viner and Sammi Levene covered a lot of ground bringing the ball down the wings.

Bonnet Bay came back close to half time with a free kick that was too good for Goalkeeper Ari Gold and it found the back of the net.

Half-time was a welcome respite from the heat with coach Paul Meltz changing things up a bit for the 2nd half.

The girls came out and scored quickly with Sammi Levene passing to Nicky Zwahlen whose sliding kick confused the goalie and found the net again.

With the score at 3 –1 the game seemed over until Bonnet Bay was awarded a free kick which again found the net.

The atmosphere intensified with 15 mins to go and only a 1 goal buffer. Jodie Rosenberg took a great shot from 20m out which could have sealed the match but it was a little too high and went over the crossbar. The girls kept their cool with Leigh Gordon, Jaye Mallinick and Gaby Rosenberg keeping up the attack while Lauren Klimt kept an eye on things in mid-field. With minutes to go, Nicky Zwahlen passed to Sammi Levene who sealed the game with a final goal.

The girls remain undefeated so far this season and Manager Julie Rosenberg thinks they can go all the way and win the comp next week.

To top it off, 9 of the girls in the squad commenced their final HSC examinations this week.

The final will be played on Sunday 19 Oct. 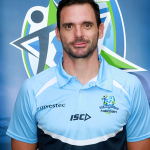