The U13s have won all games in this years Kanga Cup, amassing 20 goals and conceding only 1 and lead the table! (see below for ladder).

Great effort and good luck for the finals!

Below is an update from u13 team manager, Darren Katz.

Welcome to the special addition one week only U13 Hakoah Kanga Cup Match Report, brought to you by the dodgy pink coffee caravan at Wanniassa. Look, it was early, it was cold, and Anne queued anyway.

One of the many runs made into the box

Leaden grey skies and a chilly morning were the backdrop for the beginning of the boys’ tilt at this years’ Kanga Cup. First up opponents were the highly credentialed Glen Eira, the Victorians undefeated this season having only conceding five goals in ten games. Our boys are made of stern stuff, however, and met the challenge head on.

The first passage of the game was tightly contested, both teams congesting the midfield and finding it hard to get much width with a bumpy, tussock ridden field not helping the flow. Glen Eira then settled into their rhythm, their game based on good close control, speed in transition and a combative attitude. Although Hakoah had a good share of the possession early, Glen Eira withstood the pressure and then showed their mettle with lightning fast counter attacks. With more composure, the opposition would have been a couple of goals in the lead at half time. Instead, the back line held firm, well marshalled by Ollie Jones and Ryan Collins, Ethan Harris a brick wall as always and Zac Pillemer having to supress his natural attacking instincts to deal with a very tricky right midfielder. Ollie in particular stood tall with some last ditch defending that ensured a 0-0 score line at half time.

Whatever Mark Robertson says to the boys at half time would be worth a fortune if it was bottled. Not for the first time this season the second half performance was dominant with strong contributions all round. Hakoah took the lead as early as the third minute, Ethan De Melo tormenting the right back with intricate footwork, tapdancing down the line before a subtle inside pass to Jared Kleviansky. Jared showed excellent vision by laying the ball off to the lurking Ben Katz, who seized his opportunity with a delicate chip into the net.

Glen Eira responded purposefully, creating a couple of chances with Ethan Harris clearing one of them off the line. They were undone, however, with a flowing, end to end move. Ollie and Alexander Robertson combined to win the ball deep in Hakoah’s territory, clearing the ball to Robbie Fraser who played Matt Shapiro through with a beautifully weighted ball. Matt still had a lot to do as the opposition centre half pressured him, but his electric pace gave him that extra half a yard as he calmly stroked the ball past the keeper to make it 2-0 to Hakoah.

Four minutes later and Hakoah were awarded a soft penalty, the defender adjudged to be pushing Robbie. Severe negotiations between Alexander and Zac ensued over the penalty taker. Zac must have won their version of paper, scissors, rock before drilling his penalty over the despairing dive of the Glen Eira keeper. Within a minute it was 4-0, Robbie taking the strikers’ maxim of why not and hitting a speculative long shot that skidded off the turf below the keepers’ hands and into the net.

With two minutes left Glen Eira scored a consolation goal, a breakaway for once not dealt with by the defence and their impressive forward buried his chance with a classy finish. It was all they deserved, as a 4-1 final result did not reflect the closeness of the contest, nor the pressure and possession they enjoyed in the first half. This was a highly enjoyable game to watch from two well matched teams. For our boys, the defence stood tall in the first half while the midfielders and forwards shone in the second to make a great start to the Kanga Cup. 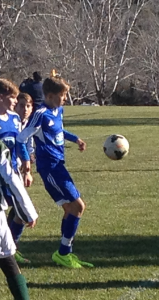 Ethan with ‘De Melo’ composure on the ball

A glorious mid-winter afternoon in southern Canberra greeted the teams, dappled sunlight filtering through the trees and coffee runs made and completed as we waited in vain for a referee to show up. The delay in finding a man in black meant that the halves were shortened to twenty minutes, which in the end was probably a relief to a Trinity team shorn of a couple of their better players and who were second best in the contest.

It took Hakoah two minutes to open the scoring, Ethan De Melo changing role from provider to predator. A strong, direct run into the box, a hard shot across the keeper and a straight forward result.

After ten minutes it was 2-0, Adam Strasser with a terrific shot from distance that never looked like missing from the moment it left his boot. Two minutes later and it was 3-0, another length of the field goal as the boys moved with purpose. Ollie spread the ball to Ethan Harris who played it up the left hand touch line to the selfless Tim Scott. Tiki taka from Tim to Alexander to Robbie, then Alexander beat players on the left before a deep cross over the Trinity defence found Jared. He took his time, measured his spot and made it 3-0.

Four minutes later and it was 4-0. Pressure from a goal kick led to a turnover of possession, Ethan De Melo could have had his second but unselfishly passed to Robbie who knocked the ball into the corner of the net.

The first half closed with Tim initiating this years’ Kanga Crossbar Challenge with a fine effort, Jared then joining in with a shot against the post.

The second half was, not surprisingly, given the standard of the first game and the scoreline, a damp squib. Teamwork seemed secondary to individual effort, although one length of the field move deserved a goal, the ball moving from Noah in goal to Ryan, out to Tim on the right who put a through ball to Matty. His first time cross was met by Zac but unfortunately was straight at the keeper.

The final action was for Robbie to join the Kanga Crossbar Challenge Club, hitting the bar with ten seconds left. The final result was a comfortable 4-0 win.

In conclusion, a successful first day with a good first performance against a tough opponent, a healthy goal difference and all to play for in the coming days. 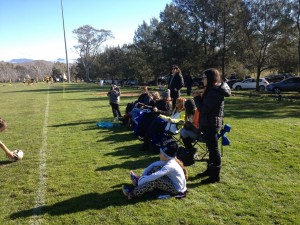 Great effort from the supporters!

Having had the pleasure of watching most of these young men play for the last few seasons, there are games where a moment of inspiration can turn a contest, perhaps the win. Then there are games like today, where the collective stand up as one, work together and, as a team, show what a special group they are.

It was clear from the first few minutes that Bayswater had a set structure and way of playing. Keep it tight at the back, contest the midfield and play it hard and long to their energetic number 10, all arms, elbows and attitude. We’ve seen this before, we’ve seen the boys struggle to break down teams that play this way. As that literati and well known Bundesliga advocate Johann Wolfgang von Goethe once opined, “difficulties increase the nearer we approach the goal.” While Goethe may have been thinking about broader existential matters than how to deal with parking the bus, it was the issue of the day for Hakoah to deal with.

The boys enjoyed the bulk of the possession in a scrappy first half, with several half chances, mishit shots and blocked crosses. Bayswater scrambled well, not allowing Hakoah effective penetration in the final third. Too often our boys received the ball with their back to goal, making it hard to press forward. They needed to remain alert, however, the glut of possession meaning nothing with four minutes left in the half when the Bayswater centre forward pounced on a long clearance and bore in on goal. Ryan Collins sprinted with him every step of the way and made an excellent tackle as the forward was shaping to shoot. From the resulting corner, Bayswater had a free header that was headed just wide.

The retaliation from Hakoah was swift and fierce. A strong burst down the left flank, Ethan De Melo with a good cross that was headed out for a corner – which OIlie Jones buried into the net with an emphatic header.

The game immediately changed from the resulting kick off. Alexander Robertson with some party tricks before smartly hitting a direct ball towards goal. Robbie Fraser sold an excellent dummy that the defence bought hook, line and sinker, the ball running through to Jared Kleviansky just inside the penalty area. Under pressure Jared shrugged off a couple of defenders, rounded the keeper and hit the ball into the net. Two nil at half time, two goals in two minutes had changed the complexion of the game.

Bayswater came out fired up for the second half, with nothing to lose. Hakoah withstood the pressure and continued to play. On thirty six minutes Tim Scott made a driving run down the right and crossed, Zac Sapsford just heading over. A couple of minutes later and Ethan “Franjic” Harris motored down three quarters of the length of the pitch before being fouled. Matty Shapiro joined in with some direct running, Adam Strasser composed as always, Ben Katz resolute, Zac Pillemer pressing forward. Bayswater were on the backfoot, resorting to lumping the ball long and hoping for a mistake from the Hakoah defence.

With ten minutes left Hakoah sealed the game with a trademark end to end move. Tim Scott, the human swiss army knife in his third position of the game, made another lung busting effort to chase down the ball to prevent a corner. The ball was switched to the left, Robbie Fraser immediately releasing the ball centrally to Zac Sapsford who had only one thought. Or maybe three. Run. Shoot. Goal. Three nil.

With the game in the bag the last ten minutes were a bit sloppy, the concentration lacking and the boys stopped doing the simple things. Thankfully Noah Feilich was still alert, his sweeping was very effective as Bayswater tried and tried again with Route One play. Full time and another clean sheet, another dominant performance.

Today was a tough game. Bayswater asked no quarter, nor was any given. Our boys had to work hard to break down an obdurate defence, and had to remain on their guard throughout the game not to be subject to the sucker punch of a quick counter attack. After sixty grinding minutes, the boys thoroughly deserved their victory, one they had earned as a team with every player contributing. 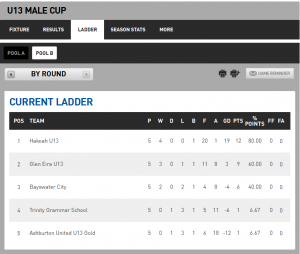